Should every mother breastfeed?

"The obvious answer would seem to be yes, however, there are many circumstances in which the mother simply cannot. Whether it be for health reasons, medication, alcohol, a conflicting occupation or maybe the mother simply can't produce enough milk to satisfy the baby, breastfeeding isn't always an option. If a new mother is healthy and there is no physiological reason why the mother can't breastfeed, then it only makes good sense to give the baby the most natural food possible, as it contains many beneficial components, such as hormones, that are not present in formula preparations." 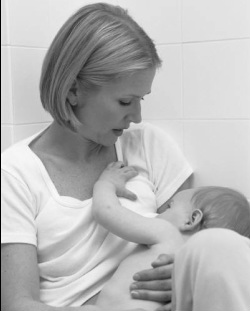 What I want to cover are the various factors that could cause or contribute to a colicky situation. First, we will discuss what effects breast milk can have on the baby and how it can affect colic. The first thing we have to look at is the mother's diet. What we have found is that certain foods can weaken the ilio-cecal valve, which we said lies between the small and large intestine, keeping the already digested substance from leaking back and re-entering the small intestine, where it tries to re-digest. We have found that certain high-fiber or protein foods will weaken this muscle or valve, as a result increasing leakage. These foods are also harder to digest, which creates a higher production of intestinal gas. There are other substances such as spices, fruits, carbonated water, soda pop, caffeine, coffee, tea, chocolate, herbs, and even vitamin supplements (especially with iron) that can be aggravating and create more leakage and gas production.

How would you know if you are eating a food that is making your baby worse? See the suggested list of foods below and follow these helpful tips in combination with D.R. Scharenberg, D.C.'s treatment to make the road to recovery much quicker.

From person to person, it is almost impossible not to find variation between what different individuals can eat. The best way to find all your “yes” foods is to go back to the basics and add one food in at a time, seeing how it reacts to your body, your baby's body, and even checking for allergies. It is suggested to begin with chicken, turkey (plain,) and bread/pasta (plain.)

If you are still having issues, read the ingredients of what you are eating. For instance, a patient of mine was eating Honey Nut Cheerios each morning, only to find out later that the nuts were causing problems. Also, granola bars are hard to find without rice, crushed nuts, or cinnamon. You may need to eventually take eggs out of your diet for a while to and monitor reactions, while also watching food like turkey bacon, as the smoke seasoning could make colic worse as well. Any special seasonings you use to grill or cook with usually contain some form of garlic or dried onions, making them potential colic-agressors. Don’t overlook what's on your sandwich, as mustard and pickles could aggravate colic as well as mayonnaise, which contains eggs.

Most patients report being able to eat the bulk of the “no” list with the exception of chocolate and caffeine within 2-3 weeks after completion of treatment. Add each item in slowly to see if there is a reaction.

List of Foods that can Cause Colic in Infants

We realize this isn't necessarily a healthy diet but it has shown to work the best until the colic has been corrected. Usually our colicky babies are doing well after eight to ten visits. If the baby is asymptomatic with no more conflict, we will usually start the mother back on hamburger. If this works well for about two days, we slowly start adding foods back into the diet and within about one week the mother should be able to eat almost everything without affecting or causing any colic symptoms.

We have learned that if the mother eats something on the NO list, the baby will have a negative response at the first feeding. We have also noticed it takes twelve to twenty-four hours to get it out of her system to stop bothering the baby. There is no way to determine in advance which foods will bother the baby, so we suggest the mother only eat what is on the YES list until the babies colic is corrected.

We know very well that it is hard for the mother to follow the diet, however, if she doesn't, the baby is the main person who suffers. In turn, everyone else around will suffer too because the baby will go back to crying. If the mother eats food, which weakens the valve, it will take longer to correct the colic and it will take more treatments to alleviate the pain and symptoms. If the mother doesn't change her diet, can the treatment still correct the colic? Yes, but it will take many more treatments and will take longer in general. Remember, high fiber foods and high protein always makes it worse. We have also found that lettuce and celery seem to be the worst for weakening the ilio-cecal valve. Please follow these guidelines and we know that your whole family will be happy you did.